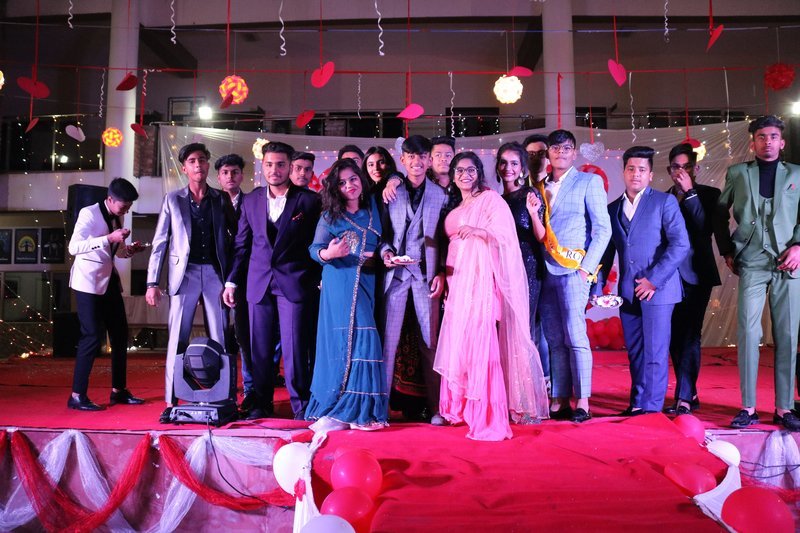 On getting ready for their very first Board Examination Grade IX organised a Good Luck Party on February 3 rd , 2020 in the assembly ground of the school campus for Grade X students, to say ALL THE BEST’ to them The ambience was beautifully decorated on the theme ‘White and Red’ with a splendid backdrop. The Chief Guest for the evening was the Director of Tula’s International School Mr. Raunak Jain and Mr. Raghav Garg Vice President Technology, Tula’s Institute was the Guest of Honour. Dr. Suresh Kumar, Dr. Nishant Saxena and Mr. Pawan Kumar Chaubey from Tula’s Institute were the Special Guests. The programme was also graced by Principal Ms Shaline Sharma, Dean of Academics Ms Gurcharan Kaur and Vice Principal, Mr Raman Koushal. The show kick started with some peppy and humorous anchoring by Juhi , Anusha and Yasir and a song by Asmit and band ‘Bekhayali’ followed by ‘Ratta Maar’.

Compliments were showered on students of Grade X by student of Grade IX. The compliments depicted the taste, interest and achievements of students. The X Graders also did an elegant and graceful ramp walk as they were called on stage.

In return students of Grade X also read compliments for their dear teachers to show their appreciation and respect towards them. The play “Tension” was highly applauded which carried a message that exams are important in life. Students also presented scintillating dance. Vinayak student of Grade-IX did a blindfold act which left everyone spellbound.

In the end title ‘Jewel of the Crown’ was conferred upon Jhanvi Karnawat in the female segment and Keshav Agarwal in the male category who were felicitated by the dignitaries. The Chief Guest Mr. Raunak Jain addressed the students and laid emphasis on facing exams in friendly manner. He also laid stress on always, to respect parents. Dr. Raghav Garg shared important aspect of CBSE examinations and its question papers with students. Principal Ms Shalini Sharma gave a motivational speech on Positive Attitude. The Good Luck Party come to an end with cake cutting ceremony and vote of thanks proposed by the Co-ordinator of Grade 9 followed by DJ Nite for students.
The entire show made the students of Grade X feel highly nostalgic and full of gratitude towards Grade IX students. They left the venue seeking blessings from the teachers and with a promise that would pass the board exams with flying colours.